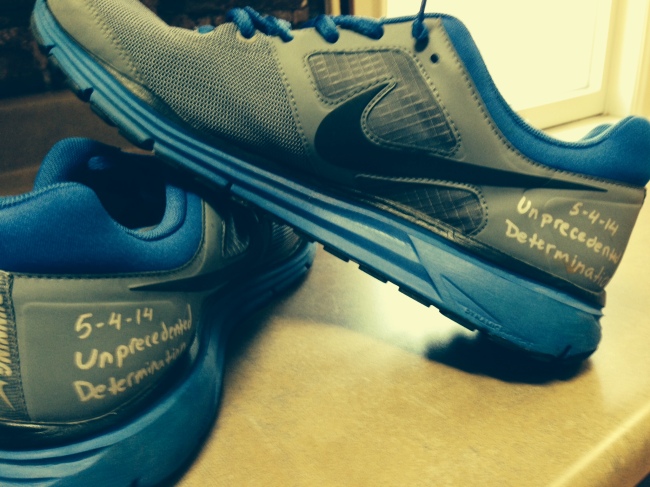 One week from today I will be competing in my ninth marathon. It is a real quick turn around from number eight, and that is by design. I am hoping to be able to get two races in, without having to go through the rigorous training regimen twice. It sounds great on paper, but I’m not entirely sure how my body will respond.

In the two weeks since my last race I do feel as though my legs have recovered quickly, and recovered well. I was able to go out and get a solid run in four days after my marathon. Since then, I have had a decent balance of rest but also getting miles as needed. The biggest struggle has been a mental battle. I know I need to continue to rest and recover, but a large part of me is itching to hit the trails and get going full-speed. The taper period is never easy for me. At times it is hard to remember that resting, is a very important part to training.

A very discouraging thing for me, is that within the past 24 hours I have picked up a bit of a bug that has left me feeling very weak, tired, and flu-ish. Perhaps this is a good thing, as it has forced me to be a lot less active than normal. But, it is also disheartening as I try to rev up for my next race, and find that walking a flight of stairs is giving me a little bit of a fit.

With that in mind, I feel as though the mantra I have accepted for #9 is quite fitting; unprecedented determination. As mentioned in previous posts, this past winter was dreadful for training. Each run I went on required a lot of determination and discipline. From the beginning of the year I had my goals laid out and I knew what I wanted to accomplish. Never before had I felt so determined and so unwavering in my attempt to conquer 1,200+ miles in a year, and four marathons (with my times averaging 3:20). In order to accomplish those things, it was going to take unprecedented determination.

As I sit down today, one week away from my second marathon of the year, and ninth overall, I am excited to take a few more steps toward accomplishing my goals. Knowing my body is perhaps a little tired from setting a marathon PR two weeks ago, and battling a bug, I can only look forward and know that one thing will help me find success a week from today: unprecedented determination.

Five days ago I completed my eighth marathon. It was a beautiful day for a race, a great course, and a lot of fun. As I started to approach the 21st mile, I could definitely feel the toll of the race. The legs were getting a little heavy, I was starting to feel out of breath, and my mind was growing increasingly fatigued. I had looked at the course map and elevation chart prior to the race and knew there was a steep hill to climb at mile 21, and a long gradual climb at mile 23.

As I rounded the corner and started to stare down the hill at mile 21, I said to myself, “You have put in a great effort so far. You haven’t walked at all, and are a bit ahead of your goal pace. Take a little break and walk up the hill.” I didn’t want to walk, but was coming up with different reasons to justify being able to walk. A few moments before I turned my run into a walk, I took one last glance up the daunting hill in front of me. This time as I looked up, I could see my friends at the top of the hill. I quickly took out my headphones so I could hear their cheering. Once I saw them, I knew there was no way I was going to walk. I could hear them from 400 meters away. They were cheering loud, cheering by my name, encouraging and pushing me. As a result, I wanted to push myself and continue to go as strong as I could. They had come out to encourage and support me, and I wanted to make sure I gave them something to cheer about.

After the race I met up with my friends and they said to me, “we were at the top of the hill watching runners for close to twenty minutes, and you were the only one who didn’t walk up the hill.” As I heard this comment, and spent more time with them in the afternoon and evening, I began to develop a great picture of the friendship I have in these two: In my moment of difficulty where I felt like giving up was the best option, they were present. It wasn’t by accident that they were at the hill near mile 21. They knew the race, they knew where I would need them, and they were there. When I felt like I didn’t have more to give, or couldn’t keep going, I heard their voices and their cheers. Their excitement for me and what I was doing, provided me with greater enthusiasm and strength to conquer what was ahead of me. They helped me accomplish something I was not capable of doing on my own. As a result of their presence, I kept going and tackled the task at hand.

Mile 21 was one of the most difficult miles of the race for me. Yet, at the same time, it was one of my favorite miles. Sometimes the path you’re on takes you up a daunting and difficult hill, and in those times it is good to know that you are not alone.

I will write more in the coming days, but wanted to post that over the weekend I finished my 8th marathon, and set a PR this time around. It was a great race and I am happy with how I did.

Here is a picture of me crossing the finishing line… 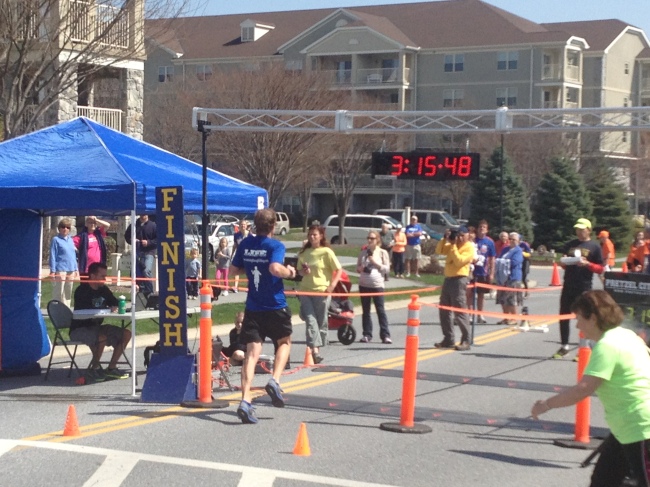 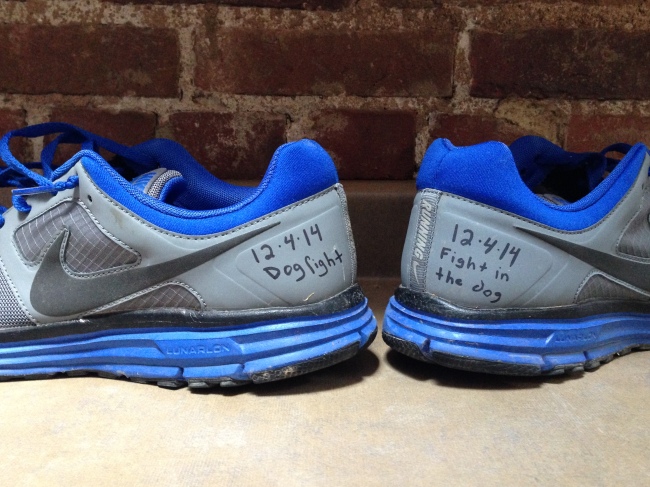 Each race will bring its own unique challenges; training for my eighth marathon has been no exception. Similar to many cities within the USA, I endured a brutal winter. I don’t know that the snow impacted me as much as other cities/people, but the frigid temperatures made for a very cold and hard winter. There were many training runs that were done in below freezing temperatures. In fact, after one run, I got home and found that there was a giant piece of ice on the wires of my headphones – I had started to sweat during the run, and because it was so cold out, the sweat froze to the wires! The overwhelming majority of my miles were done outside – not having regular access to a treadmill, if I wanted to get a run in there were two options; bundle up and try to stay warm, or don’t run. Truly, there was only the first option.

During one run I was absolutely miserable. I needed to get in a solid 8 miles, but the thermometer was being generous when it said 3 degrees, and there was definitely a wind-chill that made it feel colder than that.  I tried to bundle up as much as possible, but nothing could keep me warm. It was after this run, that I began to throw my clothes in the dryer before I ran, so that I was warm for at least a little while on my run.

While on the run mentioned above, I came up with my mantra for the race I will run in less than two weeks. There are two different phrases, both sharing similarities…

This quote is originally credited to Mark Twain, though some more commonly connect it with Dwight Eisenhower, when he was the Supreme Commander of the Allied Troops during the Second World War. This quote provides instant motivation to me, by posing the simple question, “what do you have inside of you?” That has been a great question to ask prior to lacing up my shoes for a frigid run. It brought encouragement and excitement when I had the thought, “there is some massive dedication inside of me, if I am headed out in this weather for a run!” That provided strength and determination when the weather seemed to freeze all desire to run. In looking forward, I know it will prove just as helpful when I enter the final stages of the race. Those last few miles I will be asking myself, “How much fight is there inside of you today?”  I only hope, I am content with the answer on the day of the race.

It is going to be a dogfight.

This popped into my head shortly after the first quote did. The obvious similarity in name brought it to mind, but there is also a military connection. World War I ushered in a new style of warfare; airplane combat. The term dogfight stems from this time period because at times pilots would go into a dive or turn to allude/sneak up on an enemy and would shut off their plane’s engine. Upon firing it back up, the engine would make a loud noise, similar to that of a dog barking. The term also depicts a fight between two people. One versus one. You versus me. May the best man win. This is where I find the analogy to running, me versus the race. Initially, it was the cold weather I was fighting against. Recently it has been a mental and emotional challenge against the taper period. Soon it will be the distance, and the race itself. The weather on race day.  The hills on the course. Me, versus the challenge of running 26.2 miles. It’s going to be a battle. It’s going to be tough. Every time I run a marathon, I am reminded of the difficulty of running one. This phrase raises a similar question that I will ask myself on April 12, “Who is going to win today; you, or the course?”

Training for this marathon has been hard. In some aspects, I feel like it has been the most difficult training regimen I have been through yet. I feel as though I have had to battle through a lot just to earn my place at the starting line. Yet, I know that is where the battle just begins.

It is going to be a dogfight, but I am certain there is a lot of fight in this dog.